Within Campion College the emphasis given to the Gospel values comes from our founding saints:  Edmund Campion, Mary MacKillop and Marcellin Champagnat.  The example they gave through their lives offers us a focus for the expression of our Christianity.

This focus is based around: 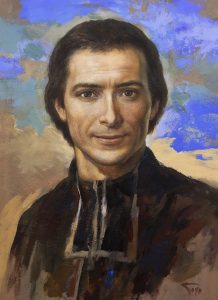 SAINT MARCELLIN CHAMPAGNAT
Marcellin Champagnat was born on 20 May, 1789, the year that the French Revolution began, in a farming hamlet in the south-west of France. He experienced little success in formal education until he was a more mature student at the seminary in Lyons. It was here that the idea of establishing an order of teaching brothers to be responsible for the schooling of young people originated.

Ordained at the age of 27, Father Champagnat was assigned to the parish of La Valla, where the first volunteers to be teaching brothers joined him. A school master trained them in teaching methods and they then began giving instruction in the villages around their parish. The brothers’ community at La Valla outgrew its small house and the Brothers constructed the famous Hermitage, designed to accommodate 150 brothers. Champagnat was released from parish work to focus his work with the Brothers. When the Marist Fathers were entrusted with the new missions in Oceania in 1836, Marcellin selected some of his brothers to go as well.

The Marist Brothers have been associated with the development of the Church in New Zealand right from its earliest days.

Accompanying Bishop Pompallier when he stepped ashore in New Zealand in January, 1838 were two missionaries, one of whom was Brother Michael, F.M.S. The other was Father Servant, S.M.

In the next 10 years many other Brothers left the security of their familiar surroundings near Lyons in France to face the hardships of missionary work in New Zealand.

In 1927 Brothers Remigius and Channel arrived in Gisborne to begin the first Marist school. They moved to the school in Lowe Street that was vacated by the Sisters of St. Joseph. By 1936 the school roll had grown so rapidly that the school was moved to the St. Anne’s Block alongside St. Mary’s school in Childers Rd.

Throughout his life Marcellin Champagnat was not deterred by hard labour nor by the criticism of Church officials nor by the rebuffs of the Government. However, in the late 1830s his health began to deteriorate. He died on 6 June, 1840, convinced that his Little Brothers of Mary (the Marist Brothers) would flourish after his death.

His legacy today is seen in the number of people who uphold his ideals of selfless service in humility and simplicity inspired by the Mother of God, of commitment to spreading the Good News of Jesus Christ, of active involvement in the lives of young people, of open-hearted family spirit and of love of one’s work.

Marcellin Champagnat was canonised a saint in 1999. His Feast Day is the 6th of June. 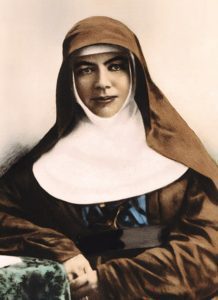 Saint Mary of the Cross MacKillop was an Australian nun who co-founded the Sisters of St Joseph of the Sacred Heart (informally known as Josephite’s). She is the first Australian to be canonised as a saint.

Mary MacKillop was born in the Melbourne suburb of Fitzroy. Her parents were Scottish migrants and she was the eldest of eight children. She was educated by her father who had spent time in Rome studying for the Catholic priesthood. From the age of 16 Mary worked as a governess.

Since childhood, MacKillop felt God calling her to make a difference in the world. She was passionate about bringing the message of God’s love to everyone she encountered, and spent her life educating and caring for people from all walks of life.

With her own family often homeless, separated and suffering from poor health, Mary MacKillop could personally relate to those who were ill or facing difficult financial circumstances.

Her dream was for all children, particularly those disadvantaged by poverty or isolation, to have the opportunity for education.

In 1866, at the age of 24, MacKillop founded the Sisters of St Joseph of the Sacred Heart in Penola, South Australia, with English priest Father Julian Tenison Woods. Their aim was to serve the needs of struggling members of society.

One project was establishing a Catholic school system for the children of poor and isolated families in the Australian colonies. With the support of Father Woods and the other sisters she also established a women’s refuge, an orphanage and a House of Providence for older women.

Mary MacKillop wore a simple black dress as a sign of her religious commitment. She lived simply and was ready to move to where she was needed.

When Mary MacKillop was 29, a misunderstanding by the bishop resulted in her excommunication from the Catholic Church for alleged insubordination. After five months the excommunication was lifted. While in Europe Mary MacKillop travelled widely to observe educational methods. During this time the Josephite’s expanded their operations into New South Wales and Aotearoa New Zealand. Mary MacKillop relocated to Sydney in 1883 and in the same year sent three sisters from Adelaide to Temuka in the South Island of Aotearoa New Zealand to establish a school.

Mary MacKillop visited New Zealand four times between 1894 and 1902, travelling throughout the country to visit the sisters and encourage them in their work. The number of sisters in New Zealand grew steadily and in the 1950s and 1960s there were over 200.

Mary MacKillop suffered from ill health throughout her life, and died in 1909 in the convent in Mount Street, North Sydney where her tomb is now enshrined.

The work of the sisters is inspired by the clarity of Mary MacKillop’s vision of a loving God at work in the world and present in every circumstance, and her belief that one should never see a need without doing something about it.

Mary MacKillop was canonised a saint in 2010. Her Feast Day is  the 8th of August. 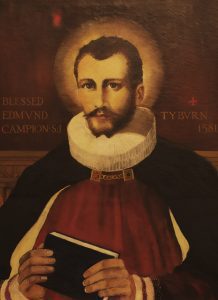 In his time, Saint Edmund Campion was renowned as an academic.  He was also a gifted orator, the product of Oxford University.  Born in 1540, as a young man he saw the religion of his birth derided by becoming “the puppet of politics”.  Campion remained at Oxford until 1570 when, for reasons of conscience, he left England and went first to Ireland and then to France.

In 1573 he left Douai College in Belgium with a degree in Theology and travelled to Prague where he remained until 1580.  While in Prague, Edmund Campion became a Jesuit Priest, and during his six years there he taught Philosophy, History and Theology.

During this time in England, harsh penalties had been imposed on Catholics.  When Campion arrived back in the country he went straight into hiding.  After a short time he undertook a journey around the entire country, preaching secretly at friendly houses.  This was an extremely dangerous practice as there were many paid bounty hunters looking for priests.

Campion was eventually captured and tortured on the rack to gain evidence of treason against the Queen.  He was then put on trial, found guilty, and put in irons for eleven days before his execution.  His last days were occupied entirely with his preparation for death.  He fasted and remained sleepless, on his knees, for two nights in prayer and meditation.

Campion’s execution involved being “hung, drawn and quartered”, a technique that involved hanging the victims until unconscious, then dragging them through the streets behind a horse and finally cutting their bodies into quarters.

Edmund Campion was one of many who were killed because of his/her religious beliefs.  His example to us is that the faith we may find so faint in ourselves had such great meaning and such grave consequence for him, that he was prepared to live and die for this.

Edmund Campion was canonised a Saint in 1970. His Feast Day is the 1st of  December.

Get the SchoolAppsNZ Mobile App